Have you ever tried the traditional Danish rice porridge? We call it ‘risengrød’. It might be a bit weird but for us Danes it is a classic dish in December and around Christmas. It is a porridge made from pudding rice (grødris) and milk and it is topped with a knob of butter and cinnamon sugar. It is creamy, velvety soft, warm and sweet. Of course, we have made a vegan version and we hope you like it.

This vegan rice porridge tastes just like the classic, you might know. We have used our loved Pea Drink Barista, because it is creamy, white in color and mild in taste. And why not use our oat drink? You can but it will have a mild taste from the oats. If you are used to the traditional cow’s milk-based rice porridge but want to make a vegan version, the pea drink is the plant drink that gives the most similar result.

Are you looking for more inspiration? Check out our recipes with plant drink.

When making a vegan version of the Danish rice porridge, you just need to switch cow’s milk with plant drink and butter with plant butter. It will give you a very similar result and most people probably won’t even notice the change. Especially when you sprinkle cinnamon sugar on top.

What plant drink should I use for rice porridge?

We have been asked this question many times. When it comes to rice porridge but also oatmeal. We have tested many different recipes and with many different plant drinks – also some of those we don’t make ourselves. We have realized that it is important to choose a type that is mild in taste to make sure the rice porridge doesn’t taste like something else (like oats or coconut). It is also important to choose a creamy one for a creamy and not watery porridge. Last but not least you need to choose a plant drink that is white in color if you want to get a similar look. All this you get from our Pea Drink Barista. It is creamy, mild and white.

How to make sure your porridge doesn’t burn

It is a big thing not to burn the porridge at the bottom of the pot. You have really succeeded if you don’t burn it. And it can be difficult. But how do you make sure it doesn’t burn? Here are some important steps:

Fun fact: Some Danes remove the pot from the heat when boiling, cover with a lid and place it in their bed, underneath their duvet. They can then leave the house and come back a few hours later to a ready rice porridge, that can quickly be heated and then eaten.

Do you want to see how this looks in a video? Check out our Instagram reels. 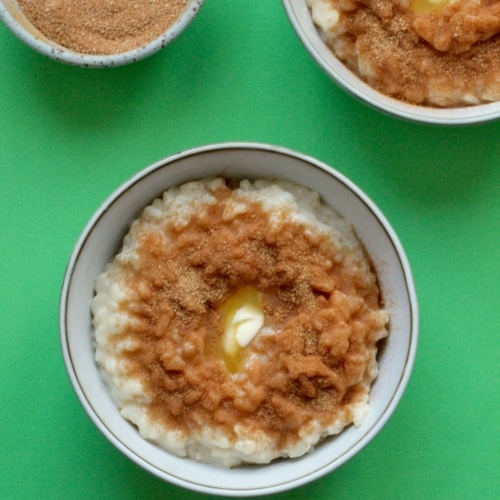 We love rice porridge. In Danish it is called 'risengrød' and it is traditionally a porridge made from milk and rice that is topped with a knob of butter and cinnamon sugar. We often eat it in December for dinner or dessert. The recipe is for 3-4 people depending on hunger.
Print Recipe Pin Recipe
Cook Time 1 hr
Course Dessert, Dinner
Cuisine Danish
Servings 3 people

Want to join the discussion?
Feel free to contribute!